Today I visited site to help an experienced applicator iron out some minor application issues they were having with the K Rend K1 Silicone product. They were complaining that the material was setting slowly now the temperatures have dropped and it was also proving difficult to handle as it was tending to tear and slip down the wall when ruling off. Finally, there were small splits and holes appearing that the applicator was having to fill during scraping off which was slowing the job down further. These are not uncommon complaints with this and other products on the market so I was thankful that an applicator finally let me join them on site to investigate and find a solution.

We decided to set the job up as per the below working parameters for todays application. The aim was to eliminate the slow set times whilst tweaking current application methods to eliminate the tearing and splitting. The first thing we did was introduce an accelerator and I used a calculator to ensure that correct dosage was used along with correct amount water in the mix. It’s a common mistake to overdose accelerators which can cause machine blocking issues due to things like flash setting blocking the pipes whilst not actually speeding set times up when the material is on the wall. Cements overdosed with accelerators may not cure with the structural strength they should have as well. Overdosing accelerators is just a big waste of money!

1 pass direct spray application of K Rend K1 Silicone onto the substrate at 17mm then scrape finished at 15mm. K Rend Mesh applied to stress points and openings. I did suggest 2 pass application but the applicator today was keen to see if we could get 1 pass working for future reference.

Temperature was 11c at 10am rising to 14c by 1pm. Slight breeze. Overcast but dry.

1 pass spray to 17mm, rule with a straight edge, Open up with an I Bar after initial set and then lightly finish with a hand scraping tool. This applicator achieved excellent results using this method, some of the best I have seen whilst still having the previously described issues with product tearing and splitting working this way.

1 pass spray to 17mm, initial level with a H Section Serrated Edge, followed by a final ruling off with a straight edge. Open up once initial set has occurred with an I Bar, followed by a light scrape.

The first thing to do was ensure the machine was running smoothly with all pressures correct. It was running like clockwork with the above water settings.

K Rend K1 Silcone was then sprayed to approx 17mm thickness in 1 pass with an under and over spray pattern as per the video. (This was against my wishes as I was suggesting 2 pass, but this applicator was stubborn!) Spraying was complete by 10.30am.

The biggest change I made to this applicators day was I suggested to use a H Section Serrated Edge levelling tool for the initial ruling off instead of just using a straight edge as these are great for removing trapped air from under the surface of the render. A serrated surface is also much easier to rule off with the straight edge as well so it should speed the ruling process up! The slow motion video above should show how easy it is to trap air when spraying. If the trapped air is not removed before levelling the surface with a straight edge the render does not get chance to properly knit together at the air pockets which may cause tearing and slippage down the wall when a straight edge is dragged across it. This obviously wastes time and causes frustration due to the need for constant reworking of the surface. The pockets of air under the surface of the render may also reveal themselves during the set or final scrape as well resulting in the need for filling holes and splits during scraping which is far from ideal.

The H Section Serrated Edge is in action in the video below. Look closely and you may see the air pockets opening up at the surface as the render knits together. We experienced absolutely no slumping or tearing of the render when using the serrated edge, much to the applicators amazement!

The serrated surface was then ruled with still no sign of tearing or slumping and the render was then left to set.

Thanks to the correctly calculated K Rend Accelerator dosage the applicator was very pleased to see that the render was ready for opening up a mere 2.5 hours after he had finished spraying and the I Bar was brought into action at 1pm! The I Barring was quickly followed by a light scrape and a brush off. Thanks to the use of the serrated edge there was none of the holes and splits that the applicator had been having to deal with previously and the finishing of the render was much quicker.

On site for 7.30am, 100 bags applied and finished by 3.50pm! Hopefully you should see that the finished result is simply stunning! The applicator is now much happier working with the material due to the small tweaks made to his technique. The Serrated Edge is now an essential tool for all the different render products he applies! 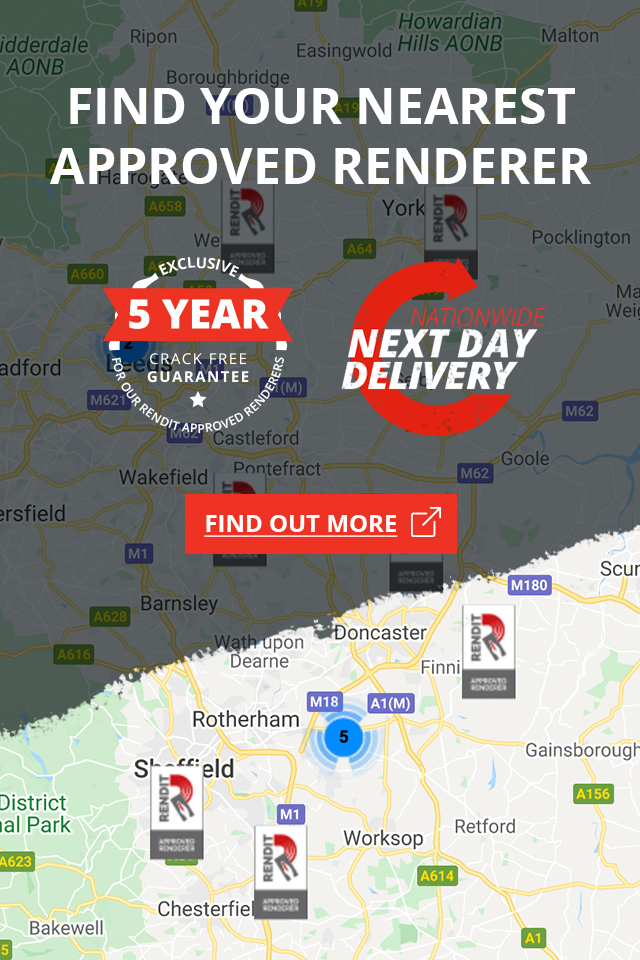